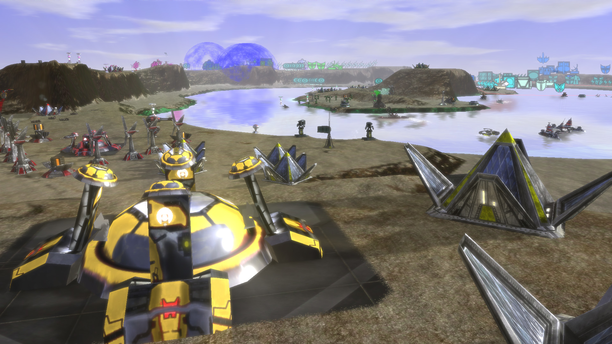 What would a completely free and open-source real-time-strategy with more than 6 years of active development but no marketing look like?

While this game has a dangerously small community for how much effort has been put into the game, this RTS has, by far, the most thoughtful gameplay and balance I've ever encountered. Unlike many other games where developers will try to force units to fill a role such as "This unit kills small units" by making it do more damage to small units, Zero-k uses the actual physics of the unit's weapon, and the unit's AI (which can be quite advanced in this game) to create these relationships between units.

For example, all bullets can be dodged, and instead of forcing the player to control every unit to dodge every bullet, units will try to do this themselves. Making small nimble units able to avoid the heavy hitting shells of slower units.

Additionally, long-range units will automatically kite enemies, so that you can take down all those slow-moving close-range enemies.

One of the leading ideas among the developers has been to never make the user have to fight the interface. This has lead to many extremely helpful features, such as the ability to draw the formation of where units will move to. Allowing you create a convex shape quickly.

On top of all of this, the game allows you to terraform (change the elevation of the map) during the game, allowing you to create ramps between previously inaccessible areas, create a height advantage for your turrets, or even to bury opponents expensive units!

All units and structures are available to the player at the beginning of the game, so a player could, theoretically, start the match by trying to build a meteor-controlling superweapon, however these actions are very costly because heavy emphases is placed on expansion to capture "mexes" which generate metal income.

But mexes are just one way to gain metal, the other, is to suck up the corpses of dead units (friendly and enemy). This forces players to choose where they do battle because a failed attack in enemy territory gives the enemy extra metal to attack you with!

Lastly, a resurgence of interest in developing AI's for the game has been happening the last year. The two leading AI's are written in C++ and Java.

If you have the time I highly recommend everyone check out this free, open-source game, and maybe even contribute to it!